The guilty verdicts were issued on October 7, 2020, by the Athens Appeals Court and found the Golden Dawn leadership guilty of the crucial and extraordinary charge of running a “criminal organisation”.  This broad brushstroke-crime mixed fact and fantasy, conspiracy, thought crime, hearsay and minor street offences, into a witch’s brew similar to American racketeering law. The statute would have it that the political party was itself a ‘crime’, or part of a crime, and reasonably it can now – be banned.

Other members of Golden Dawn were sentenced for other offences.

The show trial lasted for five years (from 2015), with the leading defendants having also endured eighteen months ‘investigative detention’. It was clear at once in 2013 with the arrests themselves, that the entire process was to be an exercise by the Greek state in the suppression of a growing nationalist party.

The Golden Dawn accused were nationalists. They were opposed to the refugee hordes knocking at the doors of Hellas. They fought the ‘Memorandum’ which saw Greece put in hock to the European bankers for its debts. As Greece teetered on the edge of a financial collapse occasioned by the usual class of shysters and criminals, Golden Dawn boomed. A party organized to the three-tier method (electoral work, community activism and ideological-cultural development and defence), Golden Dawn had become a major challenge. Europe’s bankers demanded their blood.

After the arrests in 2013, Golden Dawn was denied its special parliamentary funding, banned from the public media, refused rights to obtain public venues. In a dangerous development, an ‘anarchist’ leader mysteriously escaped from prison and was probably responsible for the murder by the machine-gunning of two young Golden Dawn activists and the grievous wounding of another. These crimes had the marks of the secret-state branded upon them. Golden Dawn offices were attacked and if members defended themselves – they would be targeted for arrest. The extreme-left (as usual) lent itself to the ‘anti-fascist / anti-racist’ struggle (sic) proving as ever, that the real challenge to globalist capitalism comes not from the Left, but the nationalists. The trial, as a show trial, was meant to demonise the defendants, the very ideals of Greek nationalism too and to signal to the people what may happen if they resist the plans of the globalists.

Greek freedom was undermined. For seven years, Golden Dawn was under siege and struggled to fight on. Its leader, General Secretary Nikos Michaloliakos, throughout revealed himself as a man whose abilities at this struggle were second to none. Indeed, no one could ever have done better. He is a Hero of the Greek Nation! His supporters are martyrs to freedom!

Last December, as the peculiarities of Greek law permit, the prosecutors told the court that the essential charge of “criminal organisation” could not be sustained and they invited the court to acquit the accused (!). Nonetheless, the court has done its duty to the state, to globalist capitalism – to convict them. Whether or not the case is appealed, whether or not it ends up in the European Court as a flagrant political case, is to us, quite irrelevant. The Greek state is the crime! This trial was politics and nothing else. A judge can throw legal perfume at it and the President of Greece can praise the verdicts, but it was a sham.

Australia First Party protested in 2013 – 2014 against the pre-trial detentions. It joined nationalists in many countries who saw the political nature of the charges. It is now likely protests will take place across the world (including Australia) and in Greece.

We salute the Greek nationalists and admonish them to establish the necessary party to resume the struggle. We encourage the Golden Dawn political prisoners to maintain their faith and fight until victory.

Many are with you! 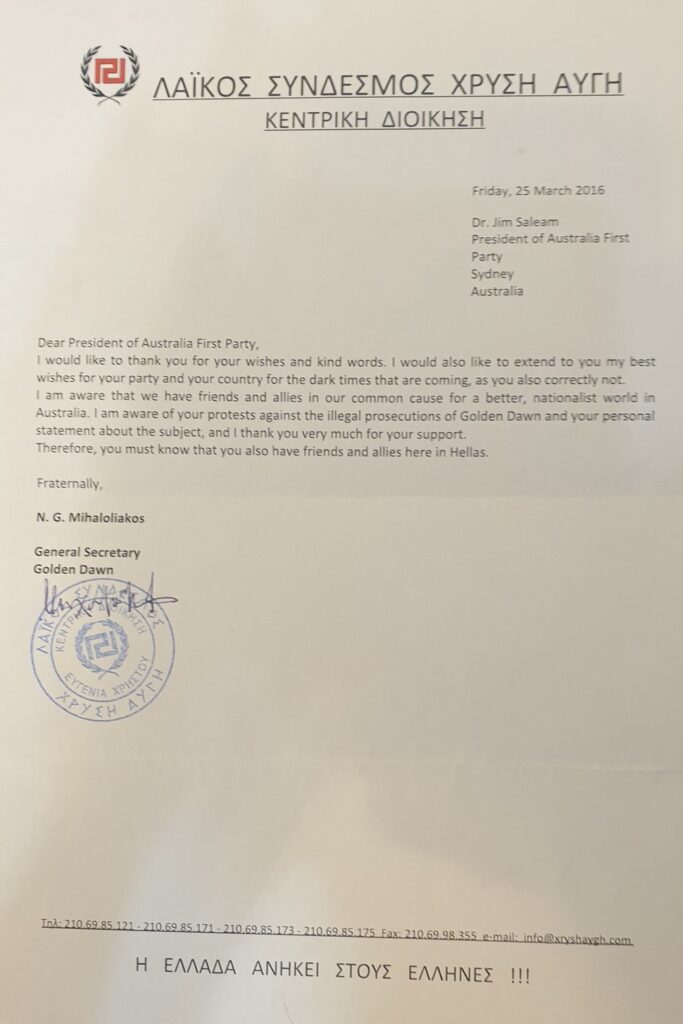